Brit Mila – Circumcision According to Tradition 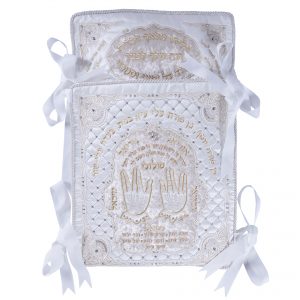 The Brit Mila ceremony usually takes place on the eighth day after a baby boy is born, and the baby’s foreskin is removed during this ceremony. This ceremony symbolizes that the baby belongs to the Biblical covenant, as it says in Genesis 17: “He that is born in thy house, and he that is bought with thy money, must be circumcised; and my covenant shall be in your flesh for an everlasting covenant”.

When the baby is brought in during the Brit Mila ceremony it is customary for the guests to say “Barukh haba Beshem Adonai” (welcome in the name of G-d). Traditionally, one of the guests is honored with the title of “Sandak” (the Godfather). His role is to hold the baby through the whole ceremony while sitting next to a chair designated as Elijah the Prophet’s chair. Blessings are said by both the Mohel (person doing the circumcision) and the father. A blessing is made over the wine, then a prayer for the baby’s health is recited and during the blessing, the baby is given his name. The great spiritual light that is available from the ceremony of the Brit Mila is revealed and manifested during the ceremonial meal that follows.

The Brit ceremony includes three main stages: “Mila”, “Peri’ah” and “Metsitsa”. All of them are mentioned in the Mishna (Tractate Avot ch. 19, P. b).

Brit Mila According to Kabbalah

There is a Midrash saying that Adam had no foreskin, and during the first Sin, he attracted it. This Midrash encodes the secret of Brit Mila, saying that before The Sin, Adam lived in a fully spiritual dimension called The Tree of Life or The Garden of Eden, which was full of Light without any suffering, pain or death. He had no worldly body or limitations; he was a whole spiritual being. After The Sin, Adam fell into a reality that is all about separation and illusion, and the foreskin contained the highest concentration of negative energy. This is why as long as Adam was a pure spiritual being he did not have a foreskin.

Immediately after the first Sin, negativity and darkness were created, along with the limitations of our senses and imagination, and the foreskin appeared on Adam. The moment Adam connected to the consciousness of his desire to receive for the self alone, which is an outcome of uncontrolled and immature connection the consciousness of the Tree of Knowledge, our free will (our ability to choose right from wrong) was also created.

Right after the Sin, the foreskin appeared in the world. This is because the foreskin belongs to a system characterized with negativity, limitation and end. The foreskin’s nature is to be like an all encompassing shell (Klipa – a negative force preventing access to a spiritual positive force). Unlike our body, the foreskin does not have a Tikun (soul correction) : meaning, to transform our body’s will from receiving only for oneself alone, to receiving, in order to pass it on (share). The correction of the foreskin can only be accomplished by removing it from the body and burying it in the earth.

There are three necessary stages contained in the Brit Mila:

Mila – the Mohel cuts the foreskin and removes it.

Peri’ah – The Mohel holds the skin that is left under the foreskin, pulls it backwards, and separates it in two.

where the circumcision was made, and then he sucks a drop of blood and spits it out wine and all. The meaning of this stage is that whatever skin is left under the foreskin contains an inner energy of negativity, and the Dinim (judgment) must be removed from it. Once this has been done, the baby’s flow of beneficial energy can commence.

According to Kabbalah, the red wine symbolizes the desire to receive. This is important as one of the spiritual rules of the Universe is that, like attracts like. In keeping with this, the Mohel touches the wine (energy of the desire to receive) with his lips to the circumcision –and by doing that, he removes/attracts all the negative energy left in the place of the circumcision.

The Spiritual Power of the Brit

The Ari tells us, that the ceremony of the Brit Mila, and the meal afterward contain so much power, that it is equal to the spiritual energy earned from forty days of fasting.

The Burial of the Foreskin

According to Kabbalah, the foreskin is the symbol of the negative consciousness/energy in our world. Therefore, after the Brit we must bury the foreskin immediately in the ground. Kabbalah tells us, the earth (soil) is the only matter that has the power to eliminate/diffuse all of the foreskin’s negativity. When it is buried, it must be done with the intention of helping to diminish the negative energy in the world. All people present at the Brit benefit from the diminishment of their own negative energy, so therefore it is advisable to invite as many people as possible to participate in the ceremony of the Brit Mila, to share the positive benefits.

Why We Should Wait Until the Eighth Day?

The ceremony of Brit Mila is performed on the eighth day. Kabbalah reveals to us, the first seven days is how long it takes the soul to enter the child’s body, and only on the eighth day, are the body and soul connected. According to Kabbalah, seven days is the time it takes to build a vessel. So on the eight day, with the help of the Brit Mila (removal of the negative shell), the child’s vessel is ready to receive the flow of positive, life sustaining energy. This process of preparing/building the vessel happens during the seven days after a marriage and during the seven days of Shiva (a time of mourning after one has passed away).

The custom for a Brit ceremony is to have two chairs, one for the Godfather and the other for Elijah the Prophet. We invite Elijah the Prophet, who appears as the angel of the Covenant, in order to remove the baby’s negative energetic covering (Klipa), to reveal the light’s perfection.

The godfather’s role is very important in the Brit Mila ceremony. Beyond the functional role as holder of the child, the Godfather is also the negotiator and supportive vessel which enables the light available through the ceremony, to pass through to the baby. Bringing the baby into the covenant of Abraham, is the seed that will enable the child’s spiritual and personal evolution as an adult. Therefore the Zohar says, the Godfather should be a spiritual man.