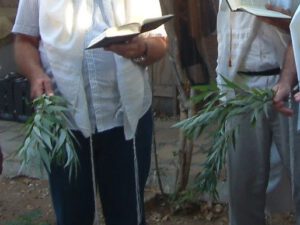 Hoshana Rabah’s eve is also called “The Night of the Seal” since our “life script” for the year to come is being sealed that night. This is an additional seal to the one created at the end of Yom Kippur during Ne’ilah.

Hoshana Raba According to Tradition

Hoshana Rabah is the seventh day of Sukkot, named after the many (seven) Hoshana prayers said that day. The custom is to take five Aravot (willows) and to strike them five times on the ground. Some traditional commentators say that the reason for that custom is that Hoshana Rabah is the last day we could change what we were sentenced for on Rosh HaShanah and Yom Kipur, and the beating of the Aravot is to show that as a result of our deep remorse for our bad deeds, our soul is bitten as the Arava branches. Because of that some stay awake all of Hoshana Rabah’s night and dedicate it for Torah study.

Hoshana Rabah According to Kabbalah

Hoshana Raba’s eve is also called “The Night of the Seal” since our “life script” for the year to come is being sealed that night.

According to the Zohar there are two kinds of seals: at Ne’ila prayer, on Yom Kippur, which could be compared to the seal of a king on his decree. However, in order to send this decree, another seal must be added on the envelope, as well. This is the second seal which is done Hoshana Raba’s eve.

At that night a verdict is given to each and every one of us for the year to come.

It is important to understand that according to Kabbalah there is no reward or punishment for our deeds and since the creator’s only will is to do us good, all the chaos in our lives is caused by ourselves and this is what our verdict is all about – all the barriers and chaos we created in our lives. The biblical holidays are gates in time allowing us to remove the chaos from our lives and to control them.

The Night of the Seal

According to Kabbalists and to the Ari’s writings, on the first half of Hoshana Rabah’s night the Seal is being created. In order to improve it we can read the whole book of Deuteronomy, also known as Mishneh Torah. The five books of the Torah are a conduit designed to connect the spiritual world (Sefirat Zeir Anpin) with the physical world (Sefirat Malkhut). Each book draws energy from a different Sefira. Deuteronomy seals and includes all of the Torah and that’s why it is also called Mishneh (=Secondary, Repetition) Torah. However, the secret, so says the Ari, is in our intentions during the reading of it. Without the right intention and a suitable meditation, everything done that evening will be in vain. If we do not go back in time to the moments we failed and invited darkness to our lives and everse this moment, than, we did not change our consciousness and our heart, which is actually the essence of the Teshuvah (penitence). It is not only about remorse and asking for forgiveness, it is also about knowing that if in the future we arrive at similar circumstances in which our evil inclination, selfishness, fear or greed will appear we will be able to transform it into sweet light. Having such transformation means going back in time to the moment before we hurt ourselves and others and that allows us to fix/correct our soul and actually change our verdict.

The Ari explains (“Shaar HaKavanot”) that when we read the book of Deuteronomy we should intend to seal the Malkhut (will be explained below). On Yom Kipur we enter the life storage of the universe; this allows us to draw blessings and abundance into our lives and erase all pain and hindrance from the source, meaning, changing our fate, our life script. On Hoshana Rabah we are given the final verdict regarding our life and livelihood. On Yom Kipur our verdict is given, however, on Hoshana Rabah our verdict is being read to the angels who are going to carry it out. The main aspect of the judgment is done on the Hoshana Rabah’s eve till midnight.

The Checking of the Shadow

It is known that the moon has no light of itself but it returns the sun’s light. That is why the moon represents the Sefira of Malkhut – the female power, humanity, the vessel that receives. The Sun represents the Sefira of Zeir Anpin – the male power, the creator, the light. The Ari explains that on Hoshana Rabah the moon reflects the verdicts of all of humanity. The Zohar says that after midnight, when the second seal has been completed, the moon shines and its light contains all the verdicts of humanity and when we stand in front of it our shade reflects our life story for the coming year. Those who are not going to make it to the next Rosh Hashana, will lose their shade after midnight (it will return on the next day). That is why it is a custom to study all night from the Zohar in order to fix/correct our soul as much as we can.

According to Kabbalah there is no verdict that could not be changed. By doing self examination and real Teshuvah we could change our verdict on Hoshana Rabah.

After studying all night it is time for the final prayer of Sukkot. It is the last time we bless on and shake the Lulav, Etrog etc. (Arba’at HaMinim, the four species), and after doing so we surround the synagogue for seven times in order to finish drawing our Surrounding Light for the year to come. These circles gave Hoshana Rabah its name. On each day of Sukkot we sing “Hosha’ Na” (save us) when we encircle the synagogue. Repeating it seven times on the seventh day is in order to correct the Malkhut (Sefirat Malkhut is the vessel, the executor of every spiritual level) of every day of Sukkot, and that is why there are seven encirclements, one for each day of Sukkot. The Tikun (correction) is being made by the spiritual lights that we draw into Malkhut by Arba’at HaMinim (the four species) during the encirclements of Hoshana Rabah.

After the seven encirclements and the completion of drawing all the Lights and the Hasadim (grace) that started to flow to us from Yom Kippur we enter the next stage which is expressed by beating the Aravot.

Since the Aravot of the Lulav have been used for drawing Hasadim and now it is time for drawing Dinim (Judgments), we need to take brand new five Aravot (willows) which we will strike them on the ground for five times. Those five beatings were meant to build the vessel of our soul and to prepare it for the union that will happen the next day on Simhat Torah – the marriage between us and the creator.

In the Malkhut’s seal there are five final Hebrew letters (letters that are used only as a last letter of the word), those “final letters” represent the Din (Judgment) energy    ם ן ץ ף ך.

On each of the beatings we take those letters into the ground (by intending so), as the ground represents the Sefira of Malkhut – the vessel of the soul. By elevating the Aravot each time after we beat them down is like a kiss preparing us for our marriage with the creator on Simhat Torah. Now, after we’ve finished building the vessel’s right and left columns through all of the holidays of Tishrei, we are having the kiss that will prepare for the union between us (the vessel) and the creator.

The Seventh Day of Passover

The Counting of The Omer

Tu Be’Av – The Holiday of Love