Last week’s portion, Teruma, dealt with the building of the Mishkan (The portable temple Moses and the Israelites have built in the desert) about which we’ve mentioned that the Zohar explains that the word “Terumah” in Hebrew should be divided and read as Tarom H, which means ‘elevating the Hey ה’, implying on our ability to elevate our reality (symbolized by the letter ה) to higher levels by actions of giving and sharing. The elevation can be achieved also by having an awareness of holiness. The portion of Tetsave keeps on dealing with the same subject, however, instead of dealing with a structure it deals with a person – the high priest.

Superficially, Tetsave, which deals with the priest (Cohen), has nothing to do with us. However, after the destruction of the second Temple (70CE), the term Cohen (priest) has lost its original meaning and it is just the last name of the descendants of the Temple Priests.

Today, we have all become priests, in a way that The Temple’s rituals became personal in order to reach a state in which “And let them make Me a sanctuary, that I may dwell among them”. This happens when each of every one of us has accepted the responsibility and the opportunity to create a Temple in everything we do; to sanctify our life, house, marriage, business, etc.

Parashat (the portion of, the story of) Tetsave opens with the words “And you shell command the children of Israel…”, meaning we need to take command over our life. We need to understand that each of us is a High Priest and we are responsible for making the changes in our lives, since our essence is to be a Creator and to be able to order and command our reality to act according to our will. Hence, we need to remember, to know and understand that this is our role – a priest. Meaning, that in our houses, at work and in everything that we touch, we need to behave and act like the high priest in the Temple.

The Zohar explains the meaning of the word “Ve’Ata” (“And you shell command…” – ואתה), which is mentioned through the entire portion. 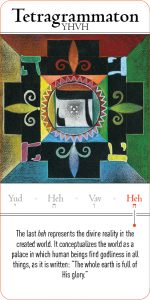 The Hebrew letter Vav (Ve’Ata – ו) is the Vav that appears in the Tetragrammaton יהו”ה, that symbolizes the spirituals abundance that flows to us from the upper worlds. The word “Ata” (you – אתה) means from A (א) to Z (ת) – meaning everything, and the letter Hey (ה) represents our world. Hence, the word Ve’Ata describes a connection to all of the spiritual abundance through the letter Vav (ו), which is the channel that diverts it to the Hey (ה) – our reality.

Last week we learned that we need to elevate the Hey (ה) and now we learn that we need to connect it with the Vav (ו). This is actually the intention of our heart that should be a part of every action we take. So whenever we do anything with holiness, purity and love, the outcome will be meaningful and powerful. We need to take responsibility on every thought or action in order to experience a real sense of success.