Light (Or) and The Creation

According to science, about 15 billion years ago our universe was created by the Big Bang. Kabbalah agrees with this concept in many ways; however the question that modern science is not dealing with, or perhaps does not even dares to discuss is what happened before the Big Bang?

According to Kabbalah, there was an infinite force of positive energy that had no beginning and no end. This primary energy is described by the word “Light”. Before the Big Bang this “Light” filled the entire reality. There was no space, no time or movement. (“The Tree of Life” – The Ari). Kabbalists learned this from the text in “Genesis”. Its first paragraph says, “In the beginning God created the heavens and the earth … And God said, Let there be light And there was light…” Since the light in our world comes from the sun that was created on the FOURTH day, we can understand that the “Light” mentioned above is a spiritual light. Where does this spiritual light disappear with the fulfillment of the creation? The Midrash explains that God treasured it for the righteous, for the future to come. This is what the Wisdom of Kabbalah is dealing with – finding that hidden “Light”. 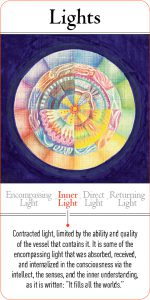 According to Kabbalah, “Light” is the living power of the Creation. It fills every part of reality, and allows its existence. We connect to the Light when we experience anything positive in life. The Light provides us with an infinite sense of peace, satisfaction, enjoyment, faith, pleasure, love and joy. All these are an expression of the character of the Light. Health is a result of positive flow of Light in our body and a sense of good luck is the result of the flow of Light in our daily actions.

The Creation of the “Vessel”

The nature of the “Light” and its essence is to spread, to give and to share. We know it since when a person is full with Light that means that he is in a mental state of bliss; one of the immediate outcomes is that he feels like sharing that feeling with others. Therefore, because at first there was only Light, a “Vessel”, had to be created, in order to receive and contain all of the “Light’s” abundance. This is how the souls of humanity, and all creatures, whose basic characteristic is a desire to receive, are the “Vessel” that was created by the “Light”. Rabbi Ashlag said that the “Light” of the creation is the living power that allows everything in our reality to exist.

Kabbalah teaches that after the creation, the “Light” expanded and shared its infinite good with the “Vessel”. When the “Vessel” also desired to be a “Creator” (when someone is happy and full of Light, he’ll shift, automatically, into a state of giving and sharing) since at that stage the “Vessel” was focused on sharing, the Vessel then reduced and contracted its own desire to receive. This stage is called “The Tsimtsum” (reduction/ contraction); that was a cataclysmic event that pushed away endless Light from the vessel, in a kind of a “Big Bang”. The result of the Tsimtsum, according to Kabbalah was a long cascade of events that lead to the formation of the world the way we know it. In other words, the “Big Bang” of modern science is a result of The Tsimtsum. In our physical world, we must seek the “Light” and then learn how to keep it. Here, every day, in countless situations we can create light from darkness, order out of disorder, success out of failure and certainty out of doubt. In this world we have the ability and the space to share, care for others, overcome challenges, and create situations that make us feel as The Light/ The Creator.

Reconnecting to the Light – Becoming a Creator 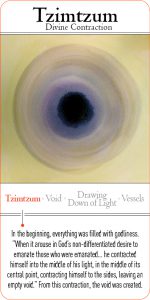 The “Light” is not a part of the physical world. In order to tap into the spiritual plane where the Light is, there is a condition. The connection to the Light can be achieved as we work for it. This work can be defined as the process through which we transform our selfish nature into a nature of giving, loving and sharing. By this we become creators ourselves. However, sharing is not enough. The Creator himself is always “a cause” and never “an effect”. Rejecting passivity and instead embracing an active pursuit to turn darkness into light is another condition to re-attach ourselves to the hidden Light. In this pursuit we create a connection between the physical and the spiritual world.

The study of Kabbalah involves learning the rules and the ways a person can achieve a constant flow of Light, “Or”, in the infinite realms of human life.