Contraction of the Vessel, not the Light 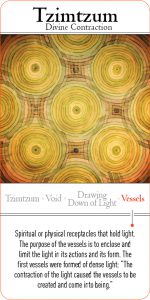 There is a very important discernment to keep in mind when studying Kabbalah; the contraction (The Tsimtsum) that caused the Light to leave the vessel – i.e. the entirety of souls – released the Light from the vessel only, and the infinite Light of Creation continues to fill the universe in the same measure as prior to the contraction. How is it that The Tsimtsum did not affect the infinite Light? The Kabbalists teach us that the vessel, which is finite and limited, cannot affect the Light whose essence is infinite. We can only affect the way in which we experience the Light but not the Light itself. In other words, that which is created cannot be a cause for He who created it.

As such, whenever we feel a withdrawal of the Light, i.e., contraction, in our lives (troubles, lack of luck, confusion, despair), the withdrawal is coming from us. The Light, nonetheless, continues to shine upon us ceaselessly. As such, if the abundance flows to us infinitely and boundlessly, why do we not experience it? The answer, as we learned in the previous session, is the sense of “Lehem Bizayon” (“Bread of Shame”) which does not allow us to connect to the Light for any length of time if we did not work for it, if we did not create and earn the abundance in an honest and worthy manner. When gratification is derived without spiritual work or creativity, the contraction sooner or later reappears and shuts out the Light, leaving behind an empty, painful void of failure.

The danger in not “being a creator”

Whenever we are in a situation of pain and darkness, some of us tend to wait for change to happen, or help to appear and redeem us from the pain. Some give in to the pain and own it, become enveloped in it, causing a downward spiral into periods of chronic despair. According to Kabbalistic wisdom, despair and depression are the direct result of disconnecting from the infinite Light of the Creator. The situation where one feels victimized, passive, hopeless, without any sense of purpose and unable to cope, is very detrimental because it is contradictory to the purpose of Creation, which is to benefit all created beings. This condition is in contradiction to the very character of our soul, which is a Divine Spark whose nature it is to create and illuminate, in the words of the Kabbalists “the Divine Component from Above”. When we succumb to despair and hopelessness, our bodies also cannot function properly and the likelihood of becoming ill increases tremendously.

Character of a winner

In contrast to the condition described above, the healthy, natural inclination is to see failure as an opportunity and choose to rise above it. The mental effort to extricate ourselves from downfall and generate hope and renewal is in itself a new creation. Such creation connects us more than anything else to the purpose of existence – to be a creator. When we choose to experience the battle against darkness while being aware that we were meant to fight and win, in this we have created a new situation in which we are the cause and not the effect, the initiator and not the victim.

It turns out that the secret to happiness of the average human being is not so much dependent on validation from an ever-changing society, but rather on one’s own ability to create “Yesh MeAyin” (Kabbalistic concept in Creation, meaning existence from nothingness), light from darkness and sweet from bitter. This kind of creation is boundless and encompasses all areas of human activity.

The principle learned here is unequivocally important and life altering, and states that every problem, every obstacle, is actually an opportunity for creation. Those who perceive life and especially its crises in this way, are more connected to happiness and a sense of success, than those who either wait for an angel of redemption to come and save them from their troubles or give in to the feeling of failure and sink into a dark place. The reason for this is that the more we are able to create light, the stronger and longer-lasting is our sense of fulfillment. There is a saying in Aramaic “according to the pain (effort) so is the reward” or, No pain, no gain.

The World of Emotion as a Launching Pad for New Creation 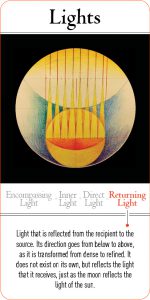 It is easy to get caught up and addicted to emotions such as hate and envy. These emotions are not accompanied by hope or the joy of creativity and, interestingly, successful individuals do not allow themselves to fall or become addicted to destructive and damaging emotions that do not bring about creation. Anger, fear and the related emotions do not encompass an ability to recreate light from darkness; creation happens only when one has overcome these emotions and replaced them with positive, creative ones.

Our daily consciousness often does not facilitate the belief in our power to overcome the negative feelings which impede our life’s purpose. The general notion is that these feelings and emotions won’t go away unless they are given expression, and that we must deeply experience feelings of pain, loss, anger, and frustration in order to release them and be free of them. Kabbalistic wisdom does not support this approach. The Zohar, the writings of the Holy Ar”i and all other Kabbalistic writings state that sadness, surrender to despair, anger and jealousy are our biggest enemies and that we must fight them. All books of Kabbalah teach that when we take action and change direction, the sense of command, empowerment and victory can never diminish, as the moment that we have created positive feelings of renewal and creation we are then connected to the essence of creation, allowing the Light to flow and fill us with exquisite feelings of restoration. As such, when we allow the Light to enter and we banish the darkness, our luck changes in every aspect of our lives.

Love, compassion and giving are the strongest sensations that connect us directly to the Light. For this reason, generosity and consideration for others reward us in a way that cannot be explained logically. Due to societal influence we often regret having been generous when we’ve been taken for granted. Kabbalistic wisdom teaches us that giving to others is actually for our benefit so that we feel that we are creators. Even if everyone around us thinks we’re fools, we know who we are, we know that our being generous is not because we want something in return but rather we are creators living out the purpose of existence. For this reason, it is important to emphasize that when we expect something in exchange for giving we are no longer a creator, but have become addicted to the dependency of the person who is supposed to be grateful to us. When there is dependency and addiction, then contraction and darkness regain control.

Love others as yourself

There is a well-known story about Rabbi Akiva who was asked by a stranger to teach him the entire Torah in one sentence. The stranger wanted to know the purpose of existence without having to plunge into the vast ocean of knowledge that lies within the Torah and the Mitsvot (precepts). Rabbi Akiva’s answer to him: “Love others as yourself (Leviticus 19:18); this is the inclusive principle in the Torah”. This means that the entire Torah rests on the ability to learn to love others without expectation, love that does not rely on anything in return. All the studying and upholding of the Mitsvot, according to Rabbi Akiva, is founded on love for others. We know if we are going against the purpose of our creation, when instead of love there is anger or hatred. This is an important guide, showing us that the closer we are to being a creator and gaining self control, so does our ability to love others unconditionally become greater. Conversely, the more distanced we are from our purpose and get caught up in our lives, so does our ability to love and share weaken.

In the next session we will learn to train ourselves to live accordingly and apply these principles.

To listen to the lecture please enter the Live Kabbalah University.