Adar is the twelfth and the last month on the Zodiac which provides it special qualities, since it is the collector of all the zodiac signs and their powers, the positive and the negative. 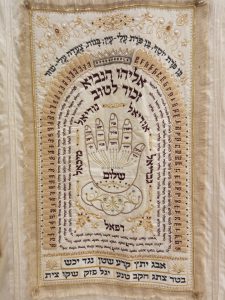 The Wisdom of Kabbalah teaches that the biblical twelve tribes of Israel represent the secrets of the twelve signs of the zodiac. The story of their birth, their naming and the history of each tribe describes the features of the zodiac signs themselves. The tribe attributed to Adar is Yoseph (Josef, linguistic from Me’asef – collector gatherer, in Hebrew). However, it is well known there is no tribe of Yoseph and instead there are his two sons, Ephraim and Menashe, which symbolize Adar A and Adar B (A Hebrew leap year has two months of Adar, seven times in a cycle of 19 years). it is also reflected in the blessings of Jacob the patriarch to Ephraim and Menashe: “… and let them grow into a multitude in the midst of the earth” (in Hebrew there is a paraphrase of the phrase “grow into a multitude” related to the reproduction of fish = Pisces, which is the zodiac sign of the month). In many cultures the fish are a symbol for protection from evil eye, and as well the Pisces are known for their good luck. Also, in the word Pisces (Dagim דגים) in Hebrew the letters גד (Gimel, Dalet = luck) appear and they symbolize of the blessing located specifically where the eye cannot see. Another aspect of the connection between Pisces and Adar is that the skeleton of the fish is called Idra (אידרה) which in Aramaic means meeting (in Hebrew Asefa אסיפה which also means collecting, gathering, linguistic from collector, as mentioned above).

The Forces that Control Adar – Pisces

The winter’s zodiac signs, as in any other season, create an alignment of three energetic forces – called in Kabbalah right (Capricorn), left (Aquarius) and central (Pisces) columns (plus, minus and a neutral, respectively).

The element of Earth, which symbolizes our material desires, lack and hunger, controls the winter and affects its signs. Regarding Pisces, it is shown in their tendency for feeling emptiness and lack and regarding themselves as victims. However, another aspect of this quality is exactly the opposite and they could develop a positive power that leads them to fight for their beliefs.

As mentioned, Pisces is also related to central column, which is influenced by the element of Air. Hence, the Pisces constant search for balance. Furthermore, most people know Pisces as a Water sign which shows great sensitivity. That could be like the other water signs, Cancer and Scorpio, big vulnerability when the sensitivity is directed inwards (selfish) or amazing social, mental, psychological skills when it is directed outside (altruistic).

The Letters of the Month of Pisces

According to Sefer Yetsira (The Book of Formation) – attributed to Abraham the Patriarch – the building blocks of the universe consist of 22 different frequencies, spiritual forces, represented by the 22 Hebrew letters. Each month is ruled by two Hebrew letters. One letter rules the planet that dominates the sign. The other letter rules the astrological sign of the month. Adar’s planet is Jupiter and is ruled by the letter ג (Gimel). Its astrological sign is Pisces, which is ruled by the letter ק (Kof).

The letter Gimel created Jupiter that controls Pisces and Sagittarius – the astrological signs of the months of Adar and Kislev, which the holidays celebrated at them symbolize the power of miracles – Purim and Hanukkah.

The letter Gimel (ג) also symbolizes abundance, prosperity of all kinds, and good luck and this is also the reason why Pisces (fish) are a symbol for protection from evil eye.

According to conventional astrology, the tendency towards fatalism and the great sensitivity of the Pisces are the reason for their lack of ambition. Therefore, one of their major goals of transformation (Tikun) is choosing rolls of leadership and responsibility (Moses was a Pisces). Pisces can use their great sensitivity and modesty to protect them against falling to the trap of egotism and arrogance that most people fall into as they achieve positions of leadership.

Due to their sensitivity they can be very supportive coming toh other people’s troubles and pain and therefore can be great leaders. Their sensitivity, which is the outcome of the combination of Jupiter and the Water element, is also the cause for their spiritual aspect, their sixth sense is very much developed, usually and their ability to communicate with spirits. Their sensitivity might be expressed as being introverted and modest. It is very much recommended for the members of this sign to be careful not to over sympathize with other people’s troubles since you can’t help people when you are engulfed with their pain.

The abundance of Jupiter is expressed in qualities such as good heartedness, generosity, the will to help people or animals.

This is the only Hebrew letter that exceed from the line downward. This descent symbolizes the world of darkness and spiritual impurity (Kelipa). The Kabbalists explain that we might consider Kof (ק) as a letter of impurity but like the other 21 Hebrew letters it is a letter of sanctity, and the part of the letter going downward indicates of its ability to feed and nourish the worlds of darkness, not by means of identifying with them but by controlling them. This is the power of Kof – the ability to play with the Kelipa and control it. This power also expressed in Pisces but it requires great wisdom or else the Pisces will fall downward and develop addictions such as gambling, alcohol, sex or drugs.

The substantial spiritual work of the Pisces is overcoming passiveness and the illusive feeling of wholeness – complacency, caused by the letter Gimel of Jupiter.

The Pisces should connect to their inner need to help their fellow-man and to use it to leverage themselves from passiveness. However, part of their Tikun is to know to say No for others’ requests, since helping others does not mean fulfilling others desires but nourishing and empowering them with spiritual Light, since we cannot force others into being happy. It is also very important for them to learn how not to immerse themselves into emotionalism (in distinguish from sensitivity) toward themselves and others. Emotionalism focuses us in the pain and that derives us from focusing on the solution. Compassion and love could help us focus on the goal and believe in it, and that is the true secret of true success.