According to Kabbalah, spiritual forces stay forever and so is the awesome force that delivered the Israelites to freedom from Egypt. This Light-force appears every year on the full moon of Aries – The 15th of the month of Nisan known also as the Passover Seder Night. We can draw this power to our lives in order to set ourselves free from our own slavery.

Passover (Pesah) is mentioned in the Torah as one of the three pilgrimage festivals (Sheloshet HaRegalim), which followed the custom of bringing sacrifices into the temple in Jerusalem.

Passover is celebrated for seven days (eight days outside of Israel) on the 15th day of the Hebrew month of Nisan.

According to tradition, the name of the holiday (Pesah) comes from the verb “to pass” in Hebrew. This reference is to G-d “passing over” the households of the Hebrews during the Tenth Plague in Egypt. The holiday also has several more names in Hebrew: The Holiday of Spring, The Holiday of Freedom and The Matsot Holiday.

Checking of the Hamets (Leavened grains)

On the 14th night of the month of Nisan, it is the custom to check the leaven (Bedikat Hamets), in order to make sure there is no leaven in the house. Checking is done after nightfall only by candlelight.

The next morning, the Hamets is burned, and after most of it is burned, it is declared that every remaining leaven is nullified and disowned.

On that evening, of the full moon, is the night of celebrating Passover’s meal – “Leil Ha’Seder”. The main ritual is to tell the story of the Exodus around the table – The Haggadah. The Passover Meal (Seder) includes specifically; Matsa, Maror (Bitter Herbs), four cups of Wine, hardboiled Egg, Karpas (Parsley) and Haroset (mixture of fruits like apples, raisins, cinnamon and nuts). And, there are other various traditions.

Passover According to Kabbalah

Kabbalah teaches us that every holiday is a gate in the dimension of time that opens every year and gives us spiritual powers that are not available during the rest of the year. Therefore, every holiday opens a gate to different spiritual revelations.

The exile in Egypt, which is the background story of this holiday symbolizes, according to Kabbalah, the exile the soul goes through when it is coming to the body with its limitations, needs, passions, fears, ego and drives. The word “Egypt” represents the limited narrow place in which we find ourselves in, along with all the stress, suffering and subjugation that we experience in various areas of life. And, are just an expression of our bondage to the body, its limitations and all the other situations where we feel limited and anxious.

Slavery in ancient Egypt ended about 3,400 years ago with the tenth Plague of Egypt and the Exodus. According to the Zohar and other writings of Kabbalists, the historical event left a great impression on our universe, so that every year, the forces that allowed the exit of the Israelites from slavery to freedom are revealed again. Passover and its rituals have one purpose, and that is, every year to allow us to harness the enormous power in the universe on the 15th of Nisan, so we may experience liberation from slavery and feel the freedom in various areas of our life. Thus, we have the holiday name “Festival of Freedom” however, the main name of the holiday is Passover, let us look at the origin of that name.

The Ari teaches that the Spiritual power revealed in the universe during Passover can free us from slavery. The name Passover should be read as Pe Sah (Pe = Mouth; Sah = Say). “Sah” has the numerical value of – 68, which is also Haim (life), suggesting that reading the Haggadah (by mouth) to draw the force of life in order to be able to break from slavery to freedom. That is the true meaning of saying a person must see himself as if he came out of Egypt, through Leil Ha”Seder everyone should have their own Exodus, separating from his ego and connecting to the light and attributes of the Creator. This is real freedom.

The Zohar teaches us that leaven represents the evil inclination, pride and ego. Flour absorbs the water into it (symbolizing our selfish desires) and then will rise and grow like a bad ego that causes us to rise over others.

The attributes that the leaven symbolizes are actually the prison in which we are trapped, unable to open up to people, love, ideas, renewal and growth. The real freedom is defined as the ability to locate and identify the leaven within us and get rid of it, and that is the true meaning of cleaning our house – physical action with a spiritual intention that have a spiritual result, internal cleaning, as well as empowering and exit from slavery to freedom.

This meaning is also reflected in the ritual of the Checking of the Hamets (leaven) on the night before Passover. This examination completes the process of identification, isolation and removal of the Hamets inside us. Therefore, the checking is done in complete darkness and with the light of a candle. The candle is always used as a connection to a spiritual essence that is beyond the senses and logic (such as meditation candle, memorial candle, Holiday candle, Shabbat candles).

The Ari created the custom of spreading ten wrapped pieces of bread.

Those pieces of leaven symbolize the ten different levels of Hamets in all of us corresponding to the ten Sefirot of the Tree of Life.

The Burning of the Hamets

The burning of the Hamets is done in the morning after the checking ritual, with the intention of burning and consuming the leaven within us after we have detected and isolated it.

Matsa is bread that is not allowed to rise. The Zohar explains that the process of making the Matsa and the intention behind it makes the Matsa become a remedy against our evil inclination. Eating Matsa during Passover and the Seder in particular should give us the strength (as long as we have that intention) to reduce our negative emotions and connect to freedom.

The three Matsa are located beneath the plate and they symbolize the hidden power of the first three Sefirot of the Tree of Life: Hokhma, Bina & Da’at – and that is why they are covered most of the time while the Haggadah is recited. 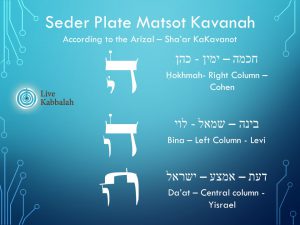 The plate contains six dishes arranged in the form of the Star of David corresponding to the following Sefirot of the Tree of Life.

Hesed – Lamb or Chicken’s neck (top right), representing the strong arm of the Creator that broke the bondage in Egypt.

Tiferet – Maror – The Bitter Herb (Horseradish) (middle), symbolizes the power of war and death, chew a mouthful with the intention to control the power of death and judgment within. (add to it Haroset, to help us in the process – see below).

Malkhut – The Plate itself.

Fifteen steps of the Seder are supposed to bring us gradually to connect to the force of freedom that appears with eating the Afikoman and at the ending of the Seder. Since the month of Nisan is the head month, just as in the month of Tishrei (Rosh Hashanah) our life and our income are being determined, so in Nisan, according to Kabbalah, the wars are set for the year to come. And just as in Yom Kippur our fate is being sealed for the year to come, so is at the end of Leil Ha’Seder, at midnight, the world’s battles are being set and sealed for the year to come. Who will fight who – nations, companies, individuals, and most importantly of all – our private wars. Therefore, the ceremony is called “Seder” (order) – the night that we can bring order into our lives and the world, in wars and chaos. This can happen as we rise above the bondage to our own evil and connect to eternal enlightenment that is available on this night.

For additional study you may enter the Live Kabbalah University