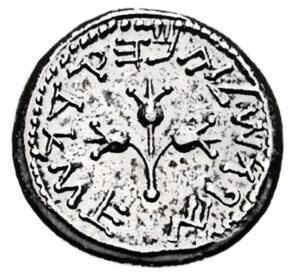 The Mitsvah of Mahatsit HaShekel ‘The Giving of Half Shekel’ appears in the Torah at the beginning of Parashat “Ki Tisa”:

Everyone … is to pay as an offering to The Lord half a shekel [one-fifth of an ounce of silver]— by the standard of the sanctuary shekel, a shekel equals twenty gerahs. (Exodus 30:13)

Today, it is customary to give half a shekel donation (the worth of 9 grams of pure silver) in the month of Adar before reading the Book of Esther on Purim.

Why half the shekel and not a whole Shekel?

The simple explanation is that in the Hebrew word half מחצית (Maḥatsit), the letter Tsadi צ appears in its center, symbolizing the principle of charity Tsedakah צדקה. The two letters next to the Tsadi צ in the word מחצית, are the letters Ḥet ח and Yod י, and together Ḥai (alive) חי, to indicate that everything close to charity is alive. The two letters distant from the letter Tsadi צ in the word מחצית, are Mem מ and Tav ת, together – Met (dead) מת to indicate that whoever is distant from charity is dead in the spiritual world since they are not connected to the Tree of Life.

Every real achievement and fulfillment in our world must be built on a twenty-count system. Therefore, the Torah states: “a shekel equals twenty gerahs.”

Anyone who wants to achieve anything is supposed to have a real desire to obtain his or her goal, so these are ten full Sephirot in every desire. But, according to the words of Rabbi Yehuda Halevi Ashlag, “After the Tsimtsum (The Contraction), the Desire to Receive can’t be anymore a vessel for the Light, fulfillment or achievement” and in its place we have to use the “Returning Light” as the vessel for abundance and Light” (Talmud Eser HaSefirot, Part I, Inner Reflection, Chapter Four).

That is, when we want something in our hearts and minds, we attract the supreme Light to us – ten Sephirot of Direct Light. Because the Desire to Receive is disqualified from being a vessel to receive, the result of the selfish desire is always a Tsimtsum (Contraction) – a momentary and immediate fulfillment after which the Tsimtsum will come – emptiness and failure.

When we want to achieve a true and lasting fulfillment, we must create the vessel of “ten Sephirot of the Returning Light”, this is the energy that is being generated by giving, devotion, sharing and caring for the Creator and for His creatures. Those who give ten out of ten (Returning Light), will achieve the complete sense of fulfillment and achievement – ten. In all, twenty, and this is why the Biblical Shekel was equal to 20 units.

When we give the “In memory for half the shekel” before Purim, we build a ‘Returning Light’ for a whole year – a sustainable vessel for abundance and success.

About giving half a shekel, the Kabbalist Rabbi Haim Palaggi writes: “Anyone who gives the Half Shekel is assured that he is a member of the heavenly world, and no harm will happen to him in that year, and even if there is a decree on him or his household members, it will be canceled. That person will not suffer poverty that year … and the one who keeps giving the Half Shekel every year will have children and long life. ”

To donate Half Shekel to Live Kabbalah