Rabbi Isaac Lurie about the nature of Plagues

All human souls originate and come from what is called “The Seven Kings of Edom that died” (known also as the broken vessels), these souls go through the process of purification and sorting (along history). When, during the sorting process, there is some (spiritual, metaphysical) filth that (is stuck and) is not sorted, that filth becomes poison. This is the poison that kills people during the Plague. This is the secret of the verse ” HaShem will stick the Plague to you” (Deuteronomy 28:21). Those Klipot (Negative forces) that are involved with that process of purification, hit and plague people during the Plague. After they hit a person, they do not leave him and they stick to him. They surround him in a diameter of few feet. More than that, the whole neighborhood of that person, his cloths and his belongings are infected and people should stay away from him. Whoever goes there will be infected with those Klipot (Negative forces) and might be hurt. 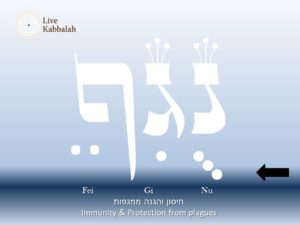 During the Tikun process of humanity, when there’s an accumulation of too much negativity, plagues erupt (Sefer HaLikutim, Ki Tavo)The Arizal).
This name has the power to return the lost Light to the souls of humanity.
Use this name together with Mem Hei Shin.
מ.ה.ש
Sefer Shorshei HaShemot, Rabbi Moshe Zaquto 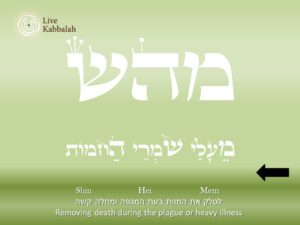