Prophesies of Redemption according to the Zohar and Kabbalistic writings 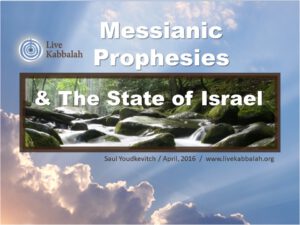 The principle of the Messiah and redemption has been a hot topic and received much attention for generations in the Jewish tradition. It has countless sources in the Bible and in the Kabbalah. Since this issue, the coming of the Messiah, has sparked the imagination and excited the hearts of many, thousands of years ago, the sages declared in tractate Sanhedrin “תיפח רוחם של מחשבי קיצין”, Cursed are the ones who’re to predict the date of the end of days. In other words, we should not focus on nor depend on “the coming of the Messiah” to radically alter our lives for the better.  Rather, being a spiritual person means focusing on taking personal responsibility and fixing what needs to be fixed in the here and now and not waiting for cosmic processes to do the job for us.

Presentation: Messianic Prophesies and The State of Israel

The Concept of the Coming of the Messiah and Redemption

The concept of the Messiah is a necessary element that exists in every spiritual Monotheistic outlook, including Kabbalah. This principle focuses on the belief that the world was created for one reason only. Since the essence of the Creator is “good”, the world was created to emulate this experience – to make all creatures feel good. Thus, the premise of all monotheistic faiths is that every state of suffering, darkness and bitterness is temporary and illusory, and therefore, all will eventually be replaced with a reality of happiness, joy and love. This is what motivates, sustains and keeps the faith alive in the eventual coming of the Messiah.

In the End it Must be Good

So, what is the source of evil in the world? We have already learned, that we were created perfectly in an infinite reality of “good”, and since we wanted to create (to emulate the Creator) as well, The Vessel contracted itself, and the reality was created in which darkness and light, bitter and sweet, are mixed together.  Here, in this world, the World of Illusion, we were given the opportunity to create and to fix ourselves, to exercise free will, and because of this we felt worthy (we earned) of the infinite abundance of Creation that was available to us all.

Regarding this, the Sages asked whether it is possible to forget this ultimate and Creator given goal? What would happen if we never reached this goal? And they answered (Rabbi Akiva in Tractate Avot) that everything is predictable and expected, and eventually we will all reach the Creator’s abundance, since there is a warranty – a net of rules of Cause and Effect (safe guards) that will lead us eventually to spiritually recognize the power we have to create good and bad in our lives.

In various sources it is mentioned that our process of Tikun (soul correction), which we are in right now, exists in a limited time frame of six thousand years. We are currently in the Hebrew calendar, in the year 5780 (2020 CE).  According to the Talmud, the Zohar and many Kabbalists, the sixth millennium (that started on 1240 CE), also called “the Millennium of the Messiah”, is a time of vicissitudes and discoveries that will bring the human race into a new era of enlightenment, unity, wisdom and world peace.

Those six thousand years parallel in their structure to the original six days of Creation. Therefore, the millennium we are living in now, the 6th millennium, corresponds with the sixth day of creation – Friday. The events that happen in it are compared to the steps that we take to prepare for the Sabbath.

According to the Hebrew calendar the beginning of the sixth millennium was in 1240 CE, and at about that time we were witnessing the end of the Dark Ages (the Zohar called the fifth millennium, “The millennium of darkness”). In Europe it is the start of the Renaissance (the 13th century), and the time for a particularly important event in the history of Kabbalah – the appearance of the Zohar in Spain.

According to the Hebrew calendar each day is made of night and day, as it is mentioned in Genesis 1, 5: “…And there was evening and there was morning, one day”. Therefore, the year 5500 – 1740 CE – the sunrise time of the sixth millennium, the sixth day – Friday. The Zohar mentions that in this time, fountains of wisdom will open in the upper and lower worlds and humanity will spread this knowledge far and wide. As we know, the industrial revolution began around the year 1740, followed by the American and French Revolutions which marked a beginning of a new age in which individual rights allowed humanity free access to information.

The Sephirot of the Shabbath

In Kabbalistic writings there is a repetitive theme about the sanctity of the Shabbath and the steps one takes in preparation to reach the pinnacle, to connect to the upper worlds – a connection to a higher world in which wealth in all areas flow, without restriction, as it will be when the human race finishes its Tikun (soul correction).      Climbing to the higher worlds does not happen the instant we light the Shabbath candles at sundown Friday night (signifies the beginning of the Sabbath). It is a process that starts five hours after sunrise (an hour before noon).

Kabbalists have calculated the exact time when the sanctity of the Sabbath begins to enter the world.

(Interesting fact: the Hebrew date was Iyar 5th and, on that year, it was Friday, May 14th).

The Rights of the Children of Ishmael in Israel

The Zohar, in Parashat Va’Era gives the historical perspective surrounding the process of the modern return to Zion. This article points out that Ishmael’s sons also had a right to the land of Israel, that the land would be desolate for a long time during the Arab rule there and they will oppose the return of the people of Israel. The Zohar also predicted a war between the Christians (the West), and the nations of Ishmael, and the main issue will be who gets Jerusalem. This dispute, says the Zohar, will continue until the final Tikun of Israel and the nations of the world will be done. The Zohar, in Parashat Shelah Lekah, also mentions the involvement of Persia (Iran) during this time and their intention to conquer the Land of Israel and control it.

A Time for Giving and a Time for Receiving

Rabbi Ashlag wrote on the establishment of Israel, that it is a great gift from above and that its establishment represents another step in our spiritual growth process that will eventually lead us, among other things, towards the appreciation and attainment of full ownership of this precious gift.

For now, Israel is a gift from above that we still do not own completely. Rabbi Ashlag said that political and economic independence will be obtained, only when we achieve the true meaning of independence.  Meaning, only when the spiritual process of the settling of the nation in its country will be complete, and we will become a shining light to the other nations of the world – i.e., building a society by the principles of love thy neighbor as thyself, will we then have true and complete ownership of the land.

It seems, then, that according to Kabbalah, our generation is the Messiah generation, that will grant our Holy Land redemption.